Smoking: How it became ‘cool’, its effects and implications on mental health

The culture of smoking originated in South America and Mesoamerica in 5000 BC by people who followed Shamanism. It later spread to parts of Europe in the 16th century by the introduction of tobacco trading and other hallucinogenic substances. Following the modernization, the increase in cigarette manufacturing and its availability has led to the spread of smoking practice all over the world.

Quitting smoking is a tough addiction to beat, but it’s one of the most important things you can do for your health. Watch this 3D medical video to know how smoking can cause lung cancer and worsen asthma.

Prevalence of smoking in India

In the world, an approx. 1 billion people, comprising almost 20% of the world population are involved in cigarette smoking. Kiribati is known to have the highest smoking population at 52.40%.

In India, approximately 120 million people are involved in smoking habits. As per World Health Organization reports, India accounts for 12% of total smokers in the world. It is seen that the smoking rate is higher in men than women.

Among teenagers, 90% used other forms of tobacco in the past and as per recent data, 70% children are still involved in the habit. 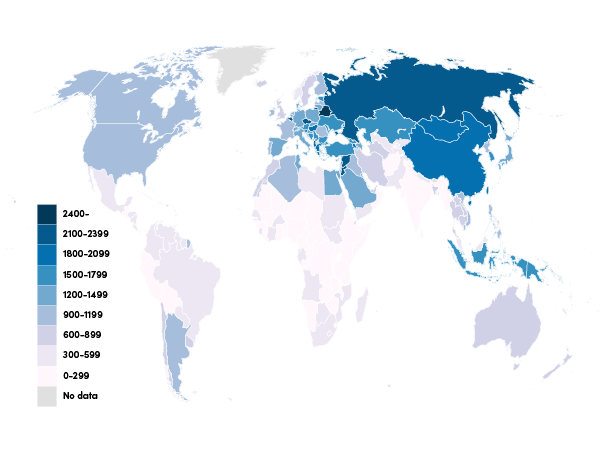 Smoking is a common practice among medical students. Students consider smoking as a stress-relieving aid due to the high-pressure environment causing psychological pressure. Other reasons for habit initiation could be the influence of friends who are involved in smoking.

Some of the reasons for not smoking could be religious or health issues or a motive to quit smoking or even an attempt to quit is considerable.

Secondhand smoking refers to the smoke of tobacco which is breathed in by the general people passively who are in close contact with a smoking person. Passive smoking, involuntary smoking, and environmental tobacco smoke are some of the forms of smoking that refer to secondhand smoking. A nonsmoker person is exposed to the same levels of the toxins and chemicals like nicotine as a smoker by inhaling secondhand smoke.

Children are most vulnerable to exposure to secondhand smoke that also increases their health issues. This smoke is also harmful to lactating mothers as these chemicals may reach breast milk.

There are more than 250 chemicals identified that are harmful to health which is inhaled in secondhand smoke. Some of these chemicals can also lead to cancer.  The U.S. Environmental Protection Agency (EPA) has classified these cancer chemicals as human carcinogens. These chemicals can also induce cardiovascular and respiratory disorders that may lead to serious health conditions. Arsenic, Vinyl chloride, Cadmium, ethylene oxide, Benzene are some of the most dangerous substances involved.

Long-term use of certain drugs can cause changes in the brain and induce conditions like depression, anxiety, hallucinations, aggression, and other concerns.  Common substances include cocaine, ketamine, marijuana, MDMA, steroids, methamphetamine, LSD, inhalants, etc. Addiction to these inductive medications or drugs doubles the chances of mental illness. 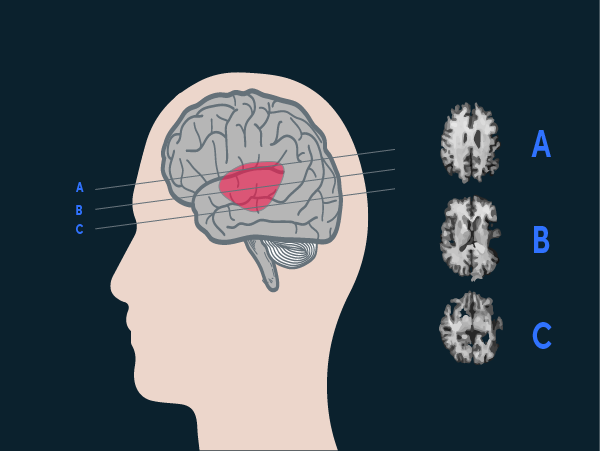 Why doctors want their patients to recover

Quitting a smoking habit has multiple health benefits for both men and women. It helps in improving health issues in people of all ages. People who stop smoking before the age of 50 have a half-time lower risk of death in the next 15 years than people who choose to smoke.

There are various risk factors associated with smoking. The occurrence of heart diseases like coronary artery disease, chances of stroke, blood clots, and arterial blockages are higher in smokers.

Respiratory problems like lung diseases, chronic obstructive pulmonary disease, emphysema, chronic bronchitis, and increased risk of lung cancer are more common in the smoking population than in nonsmokers. It becomes more difficult to treat if the patient is a smoker.  The risk for premature death also increases. Even after one of these cancers has been diagnosed, stopping smoking decreases the risk of developing second cancer and may increase the chances of surviving the first.

Smokers are at high risk of developing a cataract, retina damage, eye inflammation, and blindness as compared to non-smokers.

Smoking can negatively impact a woman's pregnancy. A pregnant woman can transfer harmful toxins during smoking to the placenta and impact prenatal growth. This may also cause problems in the newborn like crossed eyes (strabismus), infant eye disease, and other eye problems. The risk of impotence, stillbirth, infant anomalies, low birth weight of newborns is some of the factors associated with smoking.

Dental infections and gum inflammations are also associated with smoking. In general, smokers have reduced immunity and healing capacity which leads to the development of other infections and increased risk of cancers. 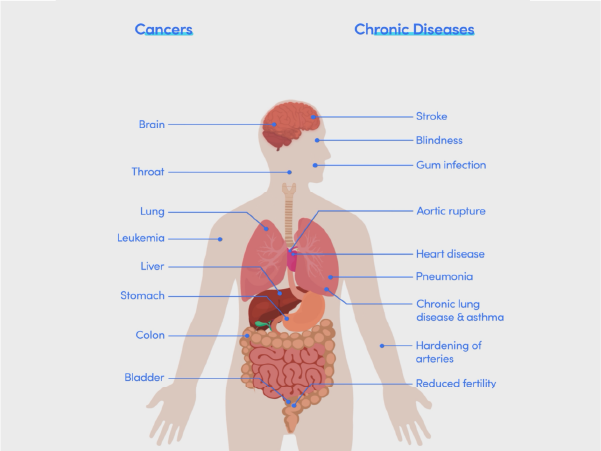 Stopping smoking not just benefits the health but also helps in strengthening the relationship with family and friends by improving the quality time, since secondhand cigarette smoke is related to a variety of serious health problems. It also enhances the socioeconomic factors and behavioral issues.

The process of discontinuing tobacco smoking is called smoking cessation. Since the chemical present in tobacco called nicotine is an addictive substance, it causes dependence, and hence, its withdrawal is a difficult process. 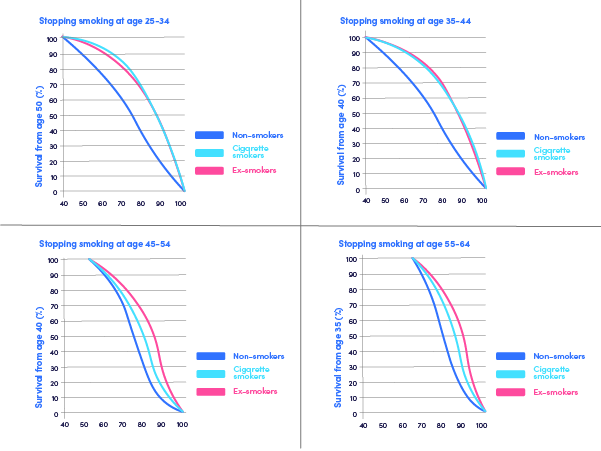 The British Doctors' Study was a prospective cohort study which ran from 1951 to 2001, and in 1956 provided convincing statistical proof that tobacco smoking increased the risk of lung cancer. 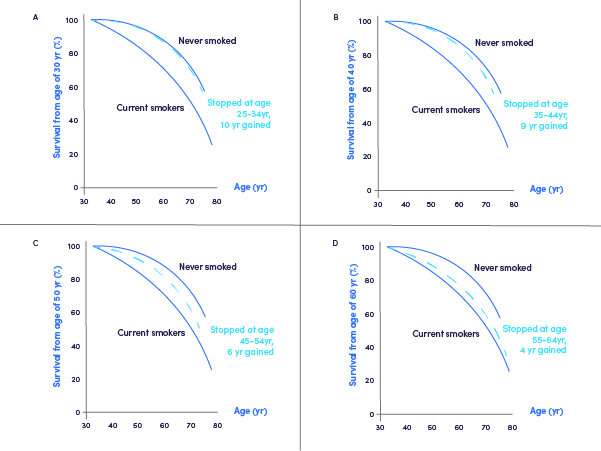 In 2002, The Ministry of Health and Family Welfare of the Government of India developed 13 tobacco cessation clinics (TCCs) with the help of the World Health Organization India Country Office. Later 19 more offices were opened to provide tobacco cessation interventions. These clinics aimed to develop smoking cessation methods for smokers.

As a result, 69 percent of users received only therapeutic intervention, while the remaining 31% received both behavioral intervention and pharmacotherapy.

On the other hand, as per surveys, almost 50% smokers failed to quit their smoking habit.  A global survey of 17,000 participants from 13 countries concluded that smokers are sacrificing their physical and economic well-being to smoke, even though many of them have the desire to quit. 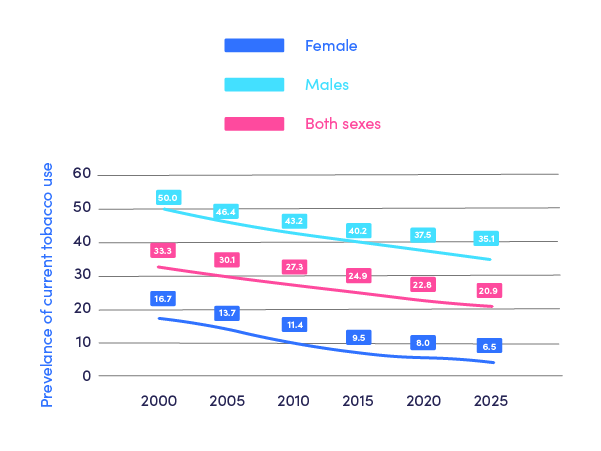 Watch our high-definition videos on the lungs, effects of smoking on the body, lung cancer, and much more, on the MediMagic App. Enjoy 14 days of your free trial by clicking here.