During the time of an unprecedented pandemic, doctors are rendering exemplary service beyond their call of duty. However, the attacks continue to rise on them with each passing day. The violent attacks on doctors, especially in the middle of a pandemic, are now becoming a cause of serious concern.

The Indian healthcare system has its set of drawbacks. The heavily understaffed and under-equipped hospitals, with a lack of modernization, have added excessive pressure on the healthcare workforce. The current doctor-to-patient ratio in India is 1:1456. This goes against the World Health Organization (WHO) prescribed ratio of 1:1000. The violence against doctors and the serious lack of safety will only worsen the situation.

In 2020 alone, India reported the highest number of attacks on healthcare professionals globally, with 128 out of the 412 incidents. A team of healthcare workers was deployed to raise awareness about Covid-19 in rural parts of Maharashtra, but what happened after their arrival was dreadful. In another shocking incident, a young doctor from Assam was brutally assaulted by a mob and relatives of a Covid-19 patient after the patient died.

Witnessing such events is not only disturbing but also demotivating for young medical students. Hence, for National Doctors' day, we took the initiative to stand against the brutality of doctors by collaborating with many medical enthusiasts on our Instagram @medimagic3D. The #StandForMed initiative aimed to raise voices and derive solutions to avoid such unfortunate events.

For this initiative, the medical enthusiasts reached out to their audiences to speak up about the brutality and provide solutions to curb this situation.

Medicine is an ever-evolving field

"Doctors are not all-knowing beings" was the joint opinion of many medical students.

Students even commented that they don't have any magical or supernatural powers to cure diseases. They are normal human beings who have developed a skill set based on already tried-and-tested scientific practices.

Elaborating on the same thought, one medical student commented that the doctors cannot be blamed for all deaths that occur and advocated for stricter laws against those who harm healthcare workers.

While many medical students were optimistic that this situation would soon change, few were pessimistic. They expressed their frustration by commenting, 'no one can understand what we medicos go through. Protests and laws won't protect us from such incidents. Such events will continue.'

Another medical student pondered if she made the right decision by choosing to study medicine in her doodles.

With the #StudyForMed initiative, we provided a platform to over 1.5 lakh medical students in India to voice their opinions against the brutality. This initiative was also featured in the Times of India and the Deccan Herald, Bangalore editions. 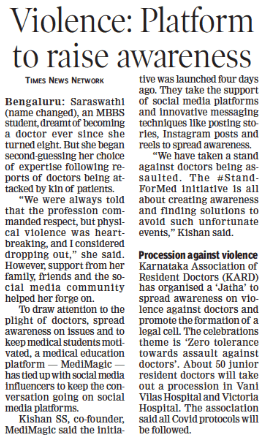 The light at the other side of the tunnel

Despite the negativity, some medical students remained optimistic. One student commented that amplifying such news is the first step towards bringing solutions. She says that the situation will get stable in the coming years, and other medical students should focus on being the best version of themselves. She also points out that every profession has challenges that people should overcome. On a final note, she says that: "The grass is always and will forever remain greener on the other side."

On this note, we encourage you to stay focused and keep the fighting spirit. Remember how far along you have come. We at MediMagic, are always here to support you through your medical journey.

The times are tough but so are you.

Check out the #StandForMed Initiative by tapping on the button below.